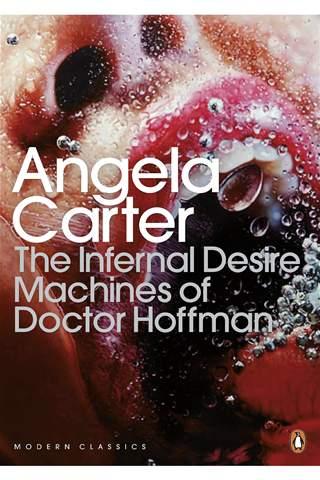 I was only familiar with Carter's radio plays and later fiction - the gothic fables most readers are aware of. The Infernal Desire Machines of Doctor Hoffman (1972) was apparently the turning point. Carter had won the Somerset Maugham Award which enabled her to spend two years in Japan, and this was the result.

It is very, very different. For a start, the protagonist-narrator, Desiderio, is a man, a minor underling in an unnamed city state in what is said to be South America, which is besieged by the illusions created by the Desire Machines. He is sent on a quest to bring down Doctor Hoffman through his daughter Albertina. The quest is utterly surreal, involving circus sideshows, freaks, Indian tribes, a swashbuckling sex-maniac Count and a tribe of centaurs. We can see the seeds of her future work.

The style, though, is experimental. She uses a quote from Jarry as an epigraph and indeed the pseudo philosophy she plays with throughout is very Jarry-esque, that is to say pataphysical. The action comes in spurts, is very colourful and often funny. It is over-wrought as so many experimental novels are. When you sling overboard all normal fictional restraints, where or why would you stop? The outcome is great fun and an essential read for all interested in Angela Carter, which should of corse be everyone. But I have to say I missed the nostalgic, almost elegiac tone of the later novels.

The introduction in this edition, by Ali Smith, is the worst I can remember reading.
Posted by rogerwood at 14:57