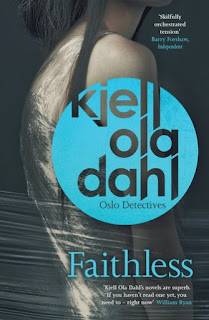 This is my first encounter with Kjell Ola Dahl and his Oslo detectives, Frolich and Gunnarstranda. Given it is a series of twelve and Faithless is number ten, it goes without saying there is a great deal of back story I am not familiar with. Some of it stands out - one of the background cops has converted to Islam - but none of it gets in the way. It just makes me want to read more.


Faithless (a title wholly irrelevant to the story) has two strands. A young African student newly arrived in Oslo goes missing, and somebody murders Veronika, the fiancée of Frolich's childhood friend Karl Anders Fransgard - a day after Frolich arrests her for drug possession and twelve hours or so before he realises who she is at Karl Anders' party. Frank then goes home with Veronika's best friend Janne, who turns out to be Karl Anders' ex and his alibi for the murder. Frolich tries to recuse himself from the investigation but Gunnarsranda can't spare him.


I liked Faithless because, for all the characters' idiosyncrasies, it is a proper police procedural. The other big Norwegian crime writer, Jo Nesbo, makes his protagonist Harry Hole so horrible that he is invariably kicked off the case and has to solve the crime in his own way. The characters are well drawn. In this story Frolich features much more than Gunnarstranda so we get to know him better. I have no idea if that is always the case but will certainly find out. Gunnarstranda's occasional interventions here just make him more enigmatic and interesting. Frolich had a big finish in this story and I am keen to find out what happens to him next. Fortunately the next in the series, The Ice Swimmer, is available in English. The latest, Courier, was published this week.


I find it inexplicable that the series is being published out of order in the UK. Faithless is the fifth of seven currently available here, which would make sense if they were only publishing the later, fully fledged instalments - but the fourth to appear in English was Ola Dahl's first novel, Lethal Investments, dating all the way back to 1993! The good news is that they are all translated by Don Bartlett, who succeeds in the hardest task for any translator - making you forget it's a translation. Ola Dahl may not be best-served by Orenda Books and their terrible covers but Bartlett serves him very well indeed.
Posted by rogerwood at 16:52