I was reading Arthur C Clarke's Prelude to Space (reviewed below) in the 1953 paperback when I was struck by one of the ads in the back. Spaceways (never heard of it) was "originally a radio play, broadcast by the BBC in 1952 with immense success. Later it was made into the first British science-fiction film." As regular visitors must know by now, my doctorate is in radio drama and, as I say, I had never heard of Spaceways. As for movies, what about The Shape of Things to Come (1936)? That was science fiction, surely? It was certainly British (London Films). Anyway, I had to investigate further. Firstly I bought the book. 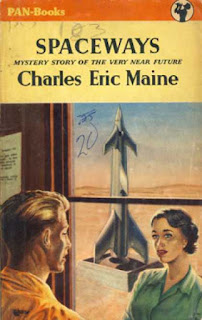 Not as good a cover as the Clarke paperbacks of the same era. The science is not as heavy as in Clarke, but ironically that results in it being closer to what actually happened - rockets taking off vertically in the middle of nowhere, rather than Clarke's fancy of horizontal runways. Maine, however, is a much better novelist than Clarke. His characters not only have inner lives, they have sex lives too, something the early Clarke would never countenance. In fact Spaceways is a genre hybrid, a noir-ish murder mystery based on the eternal triangle and set on a space research facility in the Nevada desert. Oh yes, I should have mentioned that. The pseudonymous Maine was British but this is an entirely American novel.


The other thing I should mention is that the novel is not directly based on the radio play. The radio play was turned into a Hammer movie, written by Maine, which he then turned into this book. I have looked up the credits for the radio broadcast, which seems to me to use the framing device of a court trial. It lasted 75 minutes, as did the film. The protagonist of the novel, Barry Conway of the Security Division of Special Services, is not in either the radio play or the movie. The movie seems to have a different plot to either the play or the novel. The central plot device, however, remains the same.


One of the key scientists is having a torrid affair with the wife of a senior colleague. The wife has cheated on the husband before, and he has responded violently. On the morning before the launch of the first space rocket (the novel is specifically set in 1955) the husband turns up for work with a black eye. When the rocket is safely heading for orbit, from which it will never return, it is discovered that both the wife and her lover are missing. The theory is that Hills, the cuckold, has killed them and stowed their bodies aboard the rocket. On that basis he stands trial, only to cause a sensation when he offers to prove his innocence by flying the second prototype rocket and bringing back the original. This is what happens - with an almighty twist, which I won't spoil for anyone who wants to seek out this curiosity for themselves - albeit I have as yet no idea whether it was remotely the same in either the play or the film.


And I do intend to take this further. The movie is easily available on DVD but the play will be harder to track down. In the meantime I have discovered that Maine did the same trick with other stories. Timeslip aka The Atomic Man is the movie version of his novel The Isotope Man, both of which I have already acquired.


As for the suggestion that Spaceways was the first British science fiction film, my interim theory is that whoever wrote the blurb in the back of the Pan was drawing a distinction between the post-Hiroshima technology-based fiction of Clarke, Maine and their contemporaries, and the purely speculative future fiction of Wells and Verne. Interestingly, directly underneath the blurb for Spaceways is an ad for The Time Machine and The Man Who Could Work Miracles (the latter a celebrated BBC radio drama of 1934, adapted by Laurence Gilliam). This describes H G Wells as, specifically, a "Pioneer of Space Fiction".


In the meantime, check out the long-forgotten Mr Maine. He really does merit rediscovery.
Posted by rogerwood at 16:56