The Man From Berlin - Luke McCallin 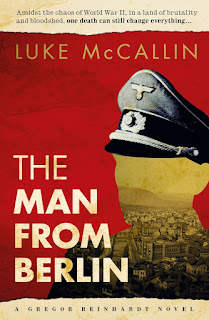 The Man From Berlin is Luke McCallin's first novel and the first in the Gregor Reinhart series. The second, The Pale House, is out now. Gregor Reinhart is a reluctant captain in the Abwehr, a decorated veteran of the First War and a former detective in the Berlin police. So far, the parallels to Philip Kerr and the Bernie Gunther series are apparent. What McCallin adds to the mix, however, is that his novels thus far are set in occupied Yugoslavia, specifically in this first case Sarajevo. Reading it, I got the distinct sense that McCallin was an expert on the former republic who made himself an expert on the various tangled strands of Nazi military police. Whether or not that is correct, the expertise in all aspects is completely convincing - so convincing that I can only presume it is completely accurate.


The characters, too, are distinctive. Reinhart is not a chancer like Gunther. He is a gentleman detective who uses his mind, never his fists. He is not a natural Nazi, albeit he would have been forced to join to continue with his police career. His life has been turned upside down by the death of his wife and he has lost contact with his son, an enthusiastic Nazi who has been embroiled in the endless siege of Stalingrad. Reinhart is not a drinker, but he toys with the idea of suicide late at night in his billet.


But then a fellow military policeman is found dead in the home of a celebrated local celebrity film maker and performer. The star herself lies butchered on the bed. Hidden behind a mirror is the mini studio from which she films some of her more exotic performances. The film itself, which is thought to have recorded her murder, is missing. The murder of the star, Marija Vukic, is a case for the local police and Reinhart is forced to liaise with the brutal Inspector Padelin. The murder of the officer, Stefan Hendel, is a matter for the Abwehr. The two cases are evidently linked but there are niceties to be observed in occupied territory, particularly so in the ethnic maelstrom of Sarajevo.


The investigation is expertly handled by McCallin, with dozens of well-drawn characters crossing Reinhart's path as he moves further up the chain of command in search of the high-ranking officer who shared Vukic's last night. McCallin is especially good at showing the tensions between the ethnic groups, some of whom are natural Nazi sympathisers and even serve in the Nazi coalition, and the various police groupings. The bizarre titles some of the officers sport is always a problem for English language authors writing for the modern reader who wasn't brought up with them. McCallin is absolutely on top of the problem and even provides a table of equivalents.


My only criticism, in fact, is that at the beginning of Book Three, when Reinhart has to travel to the front line, McCallin's research got the better of him and we had three fairly short chapters of travelogue, which I felt could easily have been cut down to one. Other than that - indeed, despite of it - The Man From Berlin is a great debut novel and Reinhart's future caseload will be essential reading for those of us who followed the late Mr Kerr.