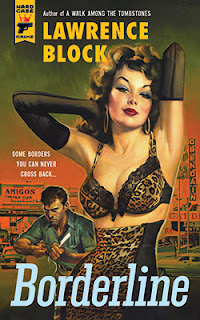 Lawrence Block is eighty years old and has been writing, at a prodigious rate, for sixty of them. Borderline is one of his earliest, from 1958, when he was twenty. It is what Block himself describes as 'mid-century erotica' combined with a significant slice of crime noir.

The border in question is that between Mexico and the United States, which makes the theme alarmingly current in Trumpland America. However it is not about immigration or drug smuggling. It is about a rag-bag of disparate characters who end up in El Paso Texas and get their jollies south of the border in Juarez. We start with Marty, a professional gambler. Then we meet Meg, newly divorced from an under-sexed but rich husband. There's Lily, a teenage hooker on the lam who forms a lesbian double act with stripper Cassie. And finally there's Weaver, the anonymous loser who suddenly finds himself on the front page after murdering a girl. We know they are all going to come together somehow. The how is what keeps us reading. That and the precociously brilliant writing.

The book also operates on a deeper level. Each character is confronted with a personal or moral border which he or she can either cross or not. Marty is smitten with Meg - who wouldn't be? - but he takes her to see Cassie and Lily's floorshow and lets her persuade him to cross his line. Lily is unmoved by sex, presumably because she gets so much of it; she's just stringing her various lovers along until she can get a stash of cash together and dump them all. Weaver can keep his head down, maybe disappear into South America, or he can embrace his new calling and go out in a blaze of notoriety. Guess which he goes for?

I'm also a huge fan of these retro reissues from Hard Case Crime. The covers alone are irresistible. Quarry's Choice, which I reviewed here last year, is one of them, and I'm reading their e-book of one of Max Allan Collins's Nathan Heller series at the moment. They even do comics, for pity's sake! I'm doomed.
Posted by rogerwood at 15:21