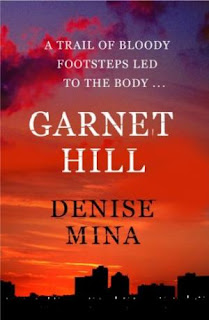 Garnethill (1999) is the first of Mina's series of the same name featuring ex-mental patient and abuse survivor Maureen O'Donnell. It is also her first novel, though you'd never guess.


Maureen has decided to end her relationship with Douglas, a therapist from her mental health clinic. She gets terrifically drunk one night, rolls home to her flat in Garnethill, and wakes next morning to find Douglas in her living room, his head hanging off and something deeply unpleasant hidden in her hall cupboard. Obviously Maureen is prime suspect - if not her, the police reason, then her drug dealer brother Liam.


Despite her somewhat addled memories of the evening in question, Maureen is confident she didn't do it. The police don't seem to be listening, so she investigates herself, sometimes with Liam's assistance, more often with Lesley, her biker pal from the women's refuge. Liam aside, she gets no support from the rest of her family, who initially assume she did it during one of her mental episodes. Maureen's mother Winnie is a colourful alkie. Maureen's sisters are both upwardly mobile, loving but with no idea about their younger siblings. Their father has long since disappeared, following young Maureen's allegations of abuse.


The plot is complex but held together, more or less, by the theme of abuse - sexual, physical, official. Even dead Douglas gets involved by leaving Maureen an appreciable amount of money as some sort of compensation. To say any more about the story would be to give too much away. The writing is of a very high standard, the tone - enlivened here and there by the grim Glaswegian humour - is spot on. The characters - those within Maureen's ambit, anyway - are fully rounded and very human in their instability. Perhaps the antagonists could do with a touch more development; circumstances got in the way of me posting this review yesterday, having finished it the evening before, and I had to take a moment to remember who killed Douglas and why, and I still can't remember the character's name.


That's my only criticism. I loved Garnethill. Sadly, it transpires I read the second in the series, Exile, back in 2015 and reviewed it here. Turns out I didn't like it as much as I liked Garnethill. Still, there's always Resolution. 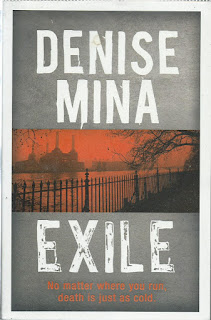 [Previously posted on this blog.]

Exile is the second of Mina's 'Garnethill' trilogy. The first, not surprisingly, is Garnethill.  The heroine, Maureen, is a damaged, abused young woman with a drug-dealing brother - not unlike Alex Morrow in the later novels.  The setting would seem to be Glasgow, as it should be in Tartan Noir, but actually about half the book takes place in London, which is a tremendous mistake, especially since the people Maureen mixes with there, even the copper with the Met who eventually listens to her, are Glaswegian,

It's a second novel which Mina made doubly hard for herself as the second in a series.  One of Mina's themes is that Scottish women have traditionally been abused by their men.  She wants to say that oppression has made them strong and feisty, a positive message.  Sadly, she undermines herself at every turn, because two of the sleaziest baddies are women and all the white knights who ride to Maureen's rescue are men - Scottish men, at that.

Exile is highly readable.  It is well plotted but, in this Orion paperback, poorly proof-read.  There are far too many characters, especially the ill-defined secondary women, and I often had to pause and wonder who is this when they reappeared much later.  There is one exception, though - Kilty Goldfarb, a great fun character who has no real purpose and has apparently just been plonked in the story to add some much needed light.  Or perhaps I was beguiled by the fact that she has the name of a well known firm of solicitors in Leicester West, now I believe defunct.  Spooky, eh?

In summary, not Mina's best by a long chalk (for me, that remains The End of the Wasp Season) but still better than many of its peers.
Posted by rogerwood at 14:19