The Shape of Sex to Come - Douglas Hill (ed) 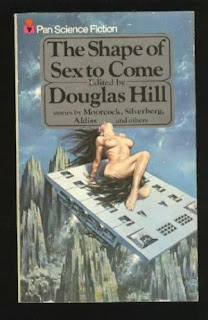 What a title, eh? Amazing to think that you probably wouldn't get away with it today but back in the Seventies a title with sex in it would get you a publishing deal by return of post. Not everything is progress just because it happens later. And a couple of the well-known writers, I was pleased to see, foresaw the return of the puritans.


All eight authors here - and anthologist Douglas Hill himself - are or were well-known Science Fiction writers, mostly connected with Michael Moorcock, who rounds off the collection. Hilary Bailey took the connection further than most; she was married to him.


The sex is not especially graphic. This is to be expected, as very few writers in the genre predict a better future. Only John Sladek's 'Machine Screw' was meant to have any pornographic overtones (it originally appeared in one of Paul Raymond's top-shelf magazines). It's about a machine raping sex robot and it is easier to understand once you know that Sladek liked his satire with his surrealism.


Moorcock and Anne McCaffrey serve up slabs of fantasy adventure, which is not top of my list. Of the two I preferred Moorcock's 'Pale Roses' which is longer and therefore richer in its strangeness. It is part of his Dancers at the End of Time subset, which I haven't yet tackled, and which put me off him back in the Seventies. For the time being, anyway, I'm sticking to Moorcock's stand alone work. Mother London is on my waiting-to-be-read table.


Brian Aldiss's entry, 'Three Song for Enigmatic Lovers', is him on top form. I may well read it again because I suspect I missed some of the inferences. A K Jorgensson's 'Coming of Age' is the story I found most disturbing, Thomas M Disch's lousily titled Planet of the Rapes' is a clever reversion of expectations, and Robert Silverberg's 'In the Group' the most relevant to today because it's basically about digital copulation. My favourite, though, is Hilary Bailey's 'Sisters', which is a near-future story about the consequences of female liberation and the loss of the maternal role. In theme it is not dissimilar to the Disch story; in treatment, however, it is a world away for the simple reason that it is by a woman who was very clever and something of a pioneer. I was extremely impressed and definitely want to read more of her work.