It's faintly disturbing to come across a book written in the year I was born, about then contemporary events, that seems so up to date today, sixty-three years later. 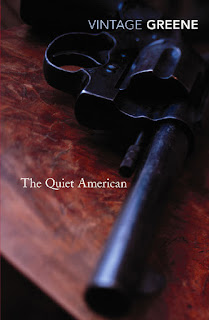 Graham Greene, as usual, knew what he was talking about. He had reported on the early stages of the Vietnam conflict and had encountered the early stages of US involvement. That is the setting here. Thomas Fowler is an ageing (in the 1950s he would have been downright elderly) reporter for a major London newspaper. He has been happily covering the conflict from Saigon for several years. It suits him because his high Anglican wife back in England won't divorce him and out East he can live with his twenty year-old girlfriend Phoung and his opium pipe. Unluckily he meets the rawest of new boys, young WASP Alden Pyle, who claims to be working for medical aid but who is clearly a 'diplomat' as they used to be called, or spy as we call them now. He supports America's policy of a third way in Vietnam (basically replace French domination with American). Pyle is a devotee of the US thinker York Harding. Harding is fictional but reflects a trend of the time. Fowler elucidates: Harding was a foreign correspondent rather than a frontline reporter; his work is all opinion with no factual underpinning. The irony is, Fowler's secure life is now threatened because his paper wants him back in London as their foreign correspondent.


Fowler and Pyle become unlikely friends. Thus Pyle encounters Phoung and falls in love. Unlike Fowler he is single and plans to take Phoung home with him. Fowler cannot do that if he returns to London and his wife still won't divorce him. So he doesn't stand in the way when Pyle takes Phoung from him. But then Pyle is found dead in the river. Inevitably Inspector Vigot suspects Fowler. Vigot and Fowler are old friends, which makes things awkward.


It could easily be a murder-mystery but it's not, albeit the story does rely on an unexpected twist in the tale. Instead it is a novel of clashing attitudes and beliefs - a strong philosophical basis brought to life by the deft characterisation of the handful of main characters. The other stroke of genius is the time structure. We start with the discovery of Pyle's body, then recover the events that preceded it. A lesser hand would have either gone back to the beginning and continued in the past or alternated, but Greene was at the peak of his powers in 1955. He flips back and forth between present and recent past - the investigation unfolds for the reader at the same time as s/he discovers the relationships between the characters and their motives. It really is brilliantly done.


For me, the only drawback was the purely journalistic stuff, the local colour. The problem here arises because in 1955 Greene could have no idea of the horrors that full American involvement would bring in the Sixties. In 1955 Vietnam was largely unknown to the English-speaking world and was very backwards under its French masters. Therefore Greene had to explain it and show how primitive it was in parts. However for those of us born in 1955 we all know about Vietnam (or we think we do - how many of us truly know that the US took over a pre-existing war and turned a war for freedom into civil war?), thus the 'native' sections were very dull for me. On the other hand, it is unmistakably, inarguably anti-American, which makes it irresistible in the time of Trump.
Posted by rogerwood at 15:30