Prelude to Space was apparently written in 1947 but not published until 1953, which I find hard to believe. There seems to be a manuscript from 1947 but is it the same text as that published in 1953? Or is it, as with so many authors, just a portmanteau title that was attached to several works until the right one came along? 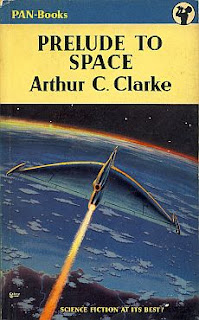 Certainly it is the right title for this novel. It is entirely about events leading up to the first moon shot in 1978, British of course, from Woomera in Australia, here rechristened Luna City. The book ends with the spaceship taking off and we can only guess the outcome from the epilogue in which our retired hero, Dirk Alexson, is living on the Moon for health reasons, a benefit I have never seen elsewhere. Other prophetic content includes the famous geostationary communication satellites, but it is the spaceship itself which is the most interesting.


Clarke envisages a two stage process for Prometheus. Beta is the mother ship which transports the rocket Alpha and fuel pods into Earth orbit. From the back of Beta, Alpha attaches itself to the fuel source and uses atomic power to head off the Moon. Thus Clarke gives us a recyclable, affordable system which causes vastly less pollutants than a the skyscraper of inflammable carbon fuel that was actually used by NASA. In time some parts of the system will be moved to the lunar surface which will become Man's gateway to the stars, hence this really is the prelude to space, not just the prelude to the Moon.


All of this stuff, framed as debates between the characters or presentations at press conferences, is totally fascinating. As a novel, however, it is a total failure. The characters are simplistic mouthpieces, even though they are supposed to possess giant intellects. There is no action, mystery or tension. Frankly, there are no meaningful human relationships. The only real fantasy is Alexson's afterlife on the Moon. Yet I loved it.
Posted by rogerwood at 15:37