Very much the flavour of the month, thanks to the Showtime dramatisations (which I hated), St Aubyn has written five autobiographical novels about his alter ego, Patrick Melrose. Bad News is the second. It is also, as it happens, the novel upon which the first episode of the dramatization was based, the only one I managed to sit through to the end. 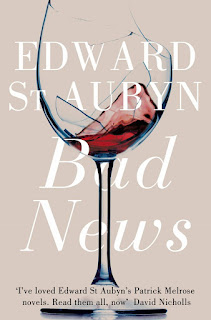 Turns out I dislike the acting of Benedict Cumberbatch much more than I dislike the writing of Edward St Aubyn. In fact, I like the writing a great deal. St Aubyn is rich, pampered, objectionable in principle - of course he became an author of autobiographical novels, that's what people like him do, just as people slightly less well off than him publish them. Talent, however, is no respecter of wealth or lack thereof. I loved St Aubyn's way with words from the off. I especially enjoyed the scenes in which Patrick is so stoned that he hears voices. I was less fond of the scene in which he dines with a trio of bores; this is because, self-evidently, they are boring.


We have to accept that Bad News is already a historic artefact, a relic of an era now long gone. 1992 (when the book was written) was when heroin chic was ultra-fashionable and those with inherited wealth were the perverted mirror of 'honest' entrepreneurs like Branson and Green. The book is set in 1982 when St Aubyn/Melrose was 22, which makes him a pioneer of excess. Patrick Melrose is reminiscent of the late 7th Marquess of Bristol, except that Melrose is never going to run out of cash. Ah, those were the days!


The trick, of course, is that St Aubyn makes Melrose not only acceptable but actually likeable. We laugh at his jokes, we tag along on his helter-skelter of Class A drugs. We do not want him to come to harm.


Much of this empathy is achieved via the horrible backstory of being raped as a child by his unspeakable father. The bad news of the title, by the way, is that old man Melrose has died in New York and Patrick has to fly in (on Concorde) to collect the cremains. We are told by the internet that this is what in fact happened to young Edward. The older Edward is successful as a novelist because he tells the tale of the ultimate sad little rich boy. He knows whereof he writes. And he really does write beautifully. More of the same for me, then!
Posted by rogerwood at 16:41