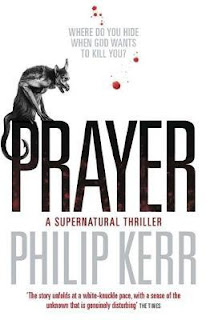 Philip Kerr died, too young, a month ago. He is best known for his exemplary Bernie Gunther novels, several of which have been reviewed on this blog. I had only read one of his non-Gunther novels, the unimpressive sci fi Gridiron (1995). Prayer (2013) is very different. It is, I suppose, a splice of supernatural suspense and a police procedural.  Giles Martins, originally from Scotland, is now with the FBI in Houston, Texas. His marriage to Ruth is on the rocks because 'Gil' has lost his faith in God. Meanwhile more famous sceptics - authors of anti-theistic books - are dying in very unusual, even terrifying circumstances. Because this might be some form of domestic terrorism, Gil is assigned to investigate.


I don't really want to go any further with the synopsis because Kerr's novels are so brilliantly plotted there is always the danger of giving too much away. I very much like the typical Kerr twist - just as Bernie Gunther is the oxymoronic 'Good Nazi', so Prayer is fundamentally the testing of Gil's lack of faith. As such it works very well. You either roll with the premise or you don't. My lack of belief is as solid as these things get yet I was happy enough with the stages of Gil's purification. Kerr has always had a gift for characterisation and is almost as good with women characters as he naturally is with men. Ruth, the Christian wife, is a bit of a pain but Sara Espinosa, Gil's romantic interest, and especially the enigmatic Gaynor Allitt are strong enough to carry novels of their own.


Kerr has always been at home with first-person narration. Prayer is no exception. That said, I was less comfortable with the various chunks of reported prose, written by others, the style of which seemed always the same. I did not take to the villain and I find thrillers always work better if the villain is as charismatic on the page as he or she is said to be in the action.


Not Kerr's best book, then - he came out of the gates with his best material, the so-called Berlin Noir sequence - but well worth reading for its own sake. I might try and get hold Hitler's Peace next, a non-Gunther Nazi novel.
Posted by rogerwood at 14:25