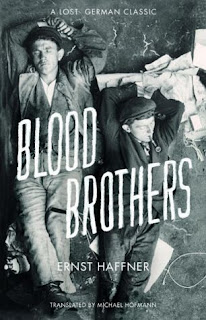 Blood Brothers was published in Germany in 1932 and suppressed the next year. It was rediscovered and republished in Germany in 2013. That's it - all we know. It's a lot more than we know about Haffner, whom we are told was a journalist and social worker. Blood Brothers is his only novel, his only book. He disappeared sometime between 1932 and 1945. There is not even a photograph of him.


What a legacy this is. It's always difficult with translations to know how accurately they reflect the original text. But Michael Hofmann is the virtuoso of translators from the German. So we can be confident that his translation is accurate and faithful. Therefore Haffner himself wrote in these breathless, staccato sentences, some of them not even complete sentences. Simplistic as they may seem, the sentences are loaded with meaning. They go off like firecrackers.


What we have is a novel of lost boys, boys in their teens who have run away from boys' homes and subsist by crime on the dark streets of Berlin. They are a gang, they share a situation, yet each is sharply defined and differentiated. We have the charismatic leader, Jonny. You can always count on Jonny. We have Fred, more flamboyant, who is the gang treasurer. And then there's Ludwig, picked up for another man's crime, who is taken back into care, only to escape again with Willi, who - paradoxically - helps him go straight in the refurbished boot business. The gang breaks up, inevitably, as the lads move on or are gaoled. It doesn't matter. They know this was always going to be a sunny interlude amid a gathering storm. Berlin can manage without them because there will always be others. There is only one Berlin. Berlin is the star, the protagonist of the superb Blood Brothers.
Posted by rogerwood at 15:20