With sci fi, your premise is everything. Fritz Leiber (1910-1992) is an acknowledged master of the genre whose series morphed into fantasy games, so you would think he knew all about premises. Gather, Darkness (1950) was his second novel and the premise seems strong but ends up as basically fatuous. 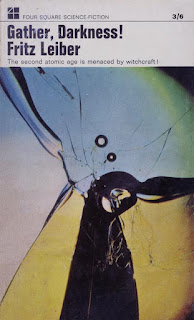 As a young man Leiber studied as a candidate minister in the episcopal church and that may well be where he got the idea for the priestly Hierarchy which rules the world in the Second Atomic Age. The Hierarchy is, it goes without saying, oppressive and tyrannical. Commoners are kept in serfdom, tithed, and subject to curfew. The resistance, as it were, is the Witchcraft. They are not what one might call active in their resistance to begin with, but then Brother Jarles, priest of the First and Outermost Circle, goes rogue and reveals the great truth of the Hierarchy to the common people - that priests do not believe in God. Sadly, the Witchcraft don't  believe in the Devil either. That is a pity because old Mother Jujy really is a witch.


The Witchcraft, however, do keep familiars - little vampiric versions of themselves - and these are great fun. There is a leader called Asmodeus but I'm not entirely sure if he is real or not. Anyway, the Witchcraft try and recruit Jarles, who refuses. He is recaptured and brainwashed by the Hierarchy and then promoted to the Fourth Circle. Leading priest and subsequent dictator Goniface sees something in him. He reminds the great man of his youthful self, when he too believed in fairness and honesty. All a long way behind him now, of course. But the sister he chucked off a bridge when she threatened his career...  she seems to be still about and utterly un-aged. Surely she is the beautiful young witch and weaver Naurya, who Jarles is infatuated with.


Anyway there's a rising. This leads to civil war. Gondiface surrenders even though he is winning. It's all very complicated. It has its entertaining moments but, overall, the passage of time has done for poor old Leiber. The hi-tech visual equipment he postulates is less futuristic than a 1960s portable TV. There are no computers. Messages are delivered by runner. And, for me, it's all just a bit too po-faced. Interesting, though.
Posted by rogerwood at 15:09