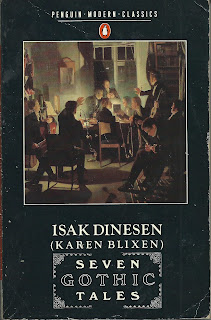 Isak Dinesen was the pen name of Karen Blixen, best known, I suppose, for Out of Africa, which was ruined for many of us by the stultifying movie with Streep and Redford. Seven Gothic Tales was her first book, written in English and published in 1934 when she was nudging 40.


The term 'gothic' has come to be synonymous with horror, but Dinesen reminds us that it need not be so. These tales are not horror but they are complex, fantastical, and very dark. Gothic, for Blixen, hovers on the boundary between fantasy and madness. They take as their starting point a sort of northern European upper class respectability and then, piece by piece, reveal the transgressive passions lurking beneath.


'The Roads Round Pisa' hinges on cross dressing, "The Old Chevalier" still fantasizes about the free-spirited woman he met in Paris in his youth, the unbridled sex they enjoyed together in the age of crinolines and corsets. "The Monkey" has a strong tint of voyeurism. Survivors of "The Deluge at Norderney" confide their dark and shameful secrets as they wait to be rescued from the flood. Sisters n "The Supper at Elsinore" maintain the fiction that they are still the local belles they were in youth. "The Dreamers" begins as a tale told on an Arab dhow off Zanzibar but becomes a trans-European quest for a prima donna who has lost her voice in a deliberate fire. And the final, shortest of the tales, "The Poet" begins with charity and goodwill before turning to passion and ultimately murder.


The tales are all very long - "The Dreamers" is nearly 90 pages and even "The Poet" is more than 50. They are tales within tales, layers within layers, and even on occasion refer to other tales within the septet. The writing is simply magnificent. Blixen spoke several languages but the fact that English was not her first means that, like Conrad, she creates new and often startling phrases that play up the falseness of the poses struck by her outwardly respectable protagonists. I see influences - Conrad, obviously, and stars of the original gothic craze like Beckford and Mrs Radcliffe; and of course you cannot think of a gothicmonkey without thinking of le Fanu and "Green Tea"- but even so the result is something so original that I cannot think of a comparison.


Sheer brilliance.
Posted by rogerwood at 15:07