Yes, here we are – another classic writer I have not read until late in life. Another I wish I had found earlier, though Zola wasn’t as prolific as many and there may yet be time. 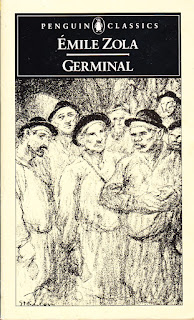 I remember watching a BBC adaptation of Germinal back when I was a teenager, with Michael Bryant, I think, and maybe Rosemary Leach. Having read the book I now understand why nothing similar is offered today. For a book published in 1885 Germinal is tract for today – about the exploitation and progressive impoverishment of the poor by international capitalism. What struck me is that Zola is explicit – he uses those terms – and is equally open about the appeal of pure communism. This translation is by the first sexologist, Havelock Ellis, and he naturally does not seek to sanitise or euphemise Zola’s vocabulary for dealing with sex and nudity, of which there is plenty.


Zola was apparently criticised at the time for his lack of flowery description and for his unsentimental characterisation. For me the semi-journalistic style worked fine and the characterisation was plenty good enough to distinguish who people are among the huge cast. The main character is Etienne, who pitches up jobless and becomes leader of an all-out strike. The main female is the truck-puller Catherine, who Etienne should have taken up with to begin with. The ending, with the two of them trapped for days in the flooding mine, took my breath away. Superb.
Posted by rogerwood at 14:39