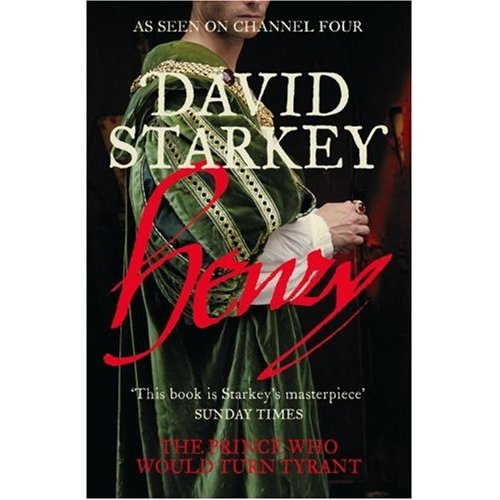 The contrast with the earlier Starkey, also reviewed here this month, is (pun unavoidable) stark. The first, Personalities and Politics was short but deep; this - half a two-volume life of Henry VIII, published in tandem with a Channel 4 TV series in 2008, is chunky but feels very slight. Everything is in half-page segments, like the novelisation of a TV script.


I didn't see the series, so I can't tell if this is in fact the case. However, the sense of slightness is misleading. There is a great deal of information here that I haven't encountered anywhere else. For example, there is detail on the treasonable behaviour of the Duke of Suffolk, Edmund de la Pole, in 1501. Similarly, though of less interest to me personally, Starkey provides lots of information about Prince Henry's nurses and an early favourite, Lord Mountjoy. On the other hand, there is far too much - in my view - about Henry's love of the joust. I suspect Starkey is laying the groundwork for an argument in the second half that jousting accidents turned Henry into a tyrant. It's a weak argument which we will never know the truth about. Severe injuries, especially to the head, have unpredictable outcomes. Both of mine, for example, have been largely beneficial.


The real problem, though, is that nobody really cares about the young Henry VIII. He was vain, self-indulgent, and lazy. He achieved very little in the first half of his reign and, equally, hardly any harm. Everything of interest - five of the wives, the Break with Rome, the Pilgrimage of Grace and the elephantine weight - comes in the second half. Still, if you're stuck with writing a life, doing so in two volumes is a reasonable way out, though the first half will inevitably be padded. I'm about to request the second instalment (Henry: The Mind of a Tyrant) from my local library.


Finally, the notes and references here are better, but still nowhere near good enough for the serious student. There is again no bibliography whatever. And to think - they may have been axed to make room for the awful author interview which takes up twelve unwanted and unnecessary pages at the end.
Posted by rogerwood at 15:03