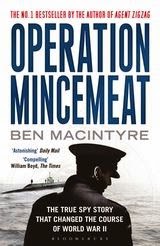 I had seen Macintyre's TV documentaries and especially enjoyed the one about Kim Philby, so picking up one of his books was a no-brainer.

Operation Mincemeat is an update of The Man Who Never Was, the book by Ewen Montagu, filmed by Ronald Neame in 1956.  That was inevitably partial - Ewen Montagu was the man behind the Man Who Never Was - and circumscribed by the demands of British foreign policy and the Official Secrets Act.  Sixty years on, Macintyre is able to go into much greater detail and take an objective overview of events.

Essentially, this is the story of the misinformation by which the British were able to deceive the Germans about where the Allies intended to invade Europe in 1943.  A dead body was given an encyclopedic back-story and dumped off Gibraltar loaded with fake information that the invasion point was to be Greece or perhaps Sardinia but certainly not Sicily, which was the true destination.  The body washed up as intended in neutral Spain.  The neutral Spanish copied the contents to the Germans and then politely returned them to the British.  The German High Command was taken in, not merely by the quality of the faked documents but also because Hitler's favourite intelligence guru was actively conspiring against him on humanitarian grounds.

And that is where Macintyre's account achieves greatness - the expert way he is able to normalise the bizarre preoccupations and habits of spies.  Montagu, in this context, comes across as a fairly straight bat, unlike the recluses and obsessives and the cross-dressers who also crop up.  On the other hand, his brother Ivor, filmmaker and table tennis enthusiast, was a spy for Soviet Russia, something which everyone in the British secret service knew full well.  Well, everyone except perhaps brother Ewen.

Despite the complexity of his tale, Macintyre tells it smoothly and persuasively.  He obviously knows huge amounts about his subject but pulls off the really clever trick of not showing off his knowledge.  Highly recommended.
Posted by rogerwood at 16:26