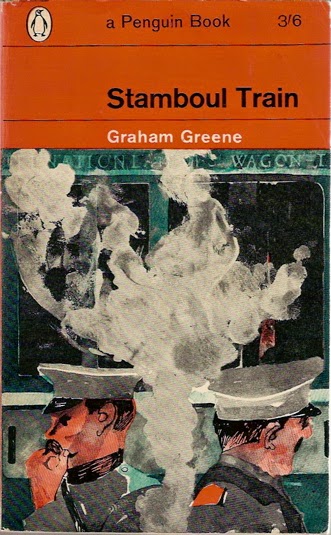 Predating Brighton Rock by six years, Stamboul Train (1932) is an early Greene 'entertainment'.  It predates Murder on the Orient Express by two years but comes four years after Christie's Murder on the Blue Train.  Thus neither author can be said to have emulated the other, though they may have influenced each other to some extent.  In any event, murders on trains had been a staple sub-genre of crime fiction since William Huskisson MP was run down and killed on the opening day of the Manchester-Liverpool Railway in 1830.

Greene's fictional world is very different from that of Mrs Christie.  The journalist Mabel Warren is an overt, no-bones-about-it lesbian, whilst her lover Janet Pardoe is a self-indulgent fortune hunter.  Our heroine, Coral Musker, is a showgirl but not naturally a goodtime girl or easy lay, though Mr Myatt, the wealthy supplier of superior currants encounters no great difficulty in that regard.  The beauty of Greene, even early Greene, is that his characters are densely layered, each capable of good and bad, heroism and cowardice.  Most conflicted is Dr Czinner, the exiled revolutionary, who has hidden for years in an English prep school but is now heading home to face whatever fate awaits.  Least conflicted is the casual murderer Grunlich, who we first encounter in Vienna, halfway through the book and serves as the polar opposite of Czinner but who, even so, is not without courage, as he demonstrates in the wonderfully-evocative Subotica.

Greene's smartest trick is to get his characters off the train every now and then, notably in Subotica but with various other excursions along the way.  By doing so, he raises his novel above genre and frees it from convention.  All train crime novels are essentially locked-room murders, which necessitates every character lying about his or her involvement.  The murder in Stamboul Train doesn't take place aboard the train and is peripheral to the main suspense.

The book, ahead of its time in terms of lesbianism and casual sex, is sadly very much of its time in its treatment of the Jewish Mr Myatt.  He dresses as a caricature Jew - fur coat and shiny suit - and is so Jewish that apparently everyone recognises his race at first glance.  Everyone despises him, even Coral to begin with, purely because he is a Jew.  More unpleasantly, he seems to despise himself because he is a Jew.

We must make allowances for attitudes of the past but it has to be said the Myatt problem did limit my enjoyment.  Everything else, though, was great fun and I especially warmed to the amoral Grunlich, who brings an extra dimension to the novel at the halfway point.  And I love Paul Hogarth's cover art on this classic Penguin.
Posted by rogerwood at 17:53