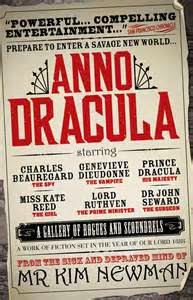 Anno Dracula (1992) is the first volume in what became a series of the same name.  Kim Newman is one of the best-known British authorities on horror films, horror stories and pulp fiction.  Anno Dracula  is all these and more.  The 'more', essentially, is that it is an alternative world story of a fictional world.  In this made-up world, Count Dracula did not die at the hands of Van Helsing and his crew but survived to marry the widowed Queen Victoria and invite all his vampire friends over to England.

It is 1888 and Jack the Ripper is slicing up vampire prostitutes.  Charles Beauregard is instructed by the Diogenes Club (chaired by Mycroft Holmes) to put a stop to Jack's japes.  Shortly thereafter he is forcibly impaneled by the Limehouse Crew  (chaired by one Fu Manchu) to do the same thing.  And so the story unfolds, not so much horror or detective yarn as a pastiche of both.  It's meant to be fun and half the fun comes from spotting literary cameos among the walk-ons.  I am a fan of both forms and doubt I got more than half of them.  Fortunately Newman provides end notes to ensure we know what we missed.  Less happily, this 2011 reissue (with the fabulous cover art) also includes several other slabs of Newman which are less enlightening.  Still, no one is forced to read them and a novel of more than 400 pages scarcely shortchanges the consumer.

A clever romp, witty, effectively-written and great fun.  I shall certainly keep an eye out for Volume 2, The Bloody Red Baron.
Posted by rogerwood at 16:23