The Lair of the White Worm - Bram Stoker

It's coming up to Halloween and I just love these Penguin yellowbacks.  I saw this and couldn't resist. 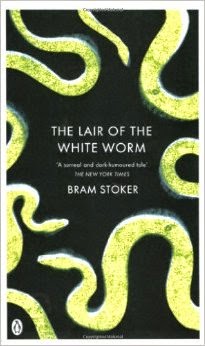 Bram Stoker was a one-novel writer - and what a novel Dracula is.  Unfortunately he wrote several other novels of which Lair of the White Worm is one.  It may be the best but we are talking a bad bunch, one of which, The Man, is just execrable.

The Lair of the White Worm is not execrable.  It's tosh.  Young Adam Salton is brought from Australia to (gawd 'elp 'im) rural Staffordshire as the chosen heir to his elderly great uncle, who plays no further part.  Instead Adam is taken up by the former diplomat and historian of Mercia Sir Nathaniel, who tells him all about the strange Caswalls of Castra Regis and druidic Diana's Grove aka the titular Lair.  There follows a load of guff, including a giant bird-scarer kite and a series of unfortunate mongooses.  There is also a lot of jaw-dropping racism concerning Caswall's black African servant Oolanga, which I fancy was a bit strong even for the Edwardian era.

It all comes to a sort of life when we realise that Lady Arabella is actually the physical embodiment of the Worm.  This comes as no surprise given that she dresses in white, wears tinted glasses, waves her arms about in serpentine manner and tears mongooses in half.  The worm itself is massive so where it all goes when it's in human form beats me.  Ultimately there's a storm with no rain, the kite does what it was always going to do and conducts lightning down to Diana's Grove which goes spectacularly bang, scattering bits of age-old worm all over Staffordshire.

The writing is medium grade pulp, full of discordant word choices and irritating habits - the number of times Sir Nathaniel says "Let's continue our discussion of this important matter when we've had dinner/lunch/supper/a kip/a walk etc. drove me insane.
Posted by rogerwood at 12:54