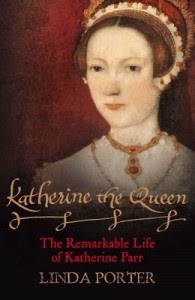 Like every other biography of Katherine Parr, Porter's book claims to be the first "full-scale" life of Henry VIII's sixth queen.  This is nonsense - publisher's puff - and should not be held against the author.  The facts are generally well known and I have to say I was a little let down by Porter's coverage of the Anne Askew affair, surely the most dangerous moment of Katherine's public life.  Other than that, Porter provides a thorough, well-written and entertaining account.  A modern biographer, of course, has to determine a persona for their subject.  Traditionally Katherine has been presented as something of a bluestocking, churning out tedious and pompous leaflets on the New Learning.  Certainly she wrote such material, and certainly her puritanical streak got her into hot water with her husband.  But Katherine was clearly also a woman of passion who, when finally free of arranged marriages, threw herself into marriage with the rakish Thomas Seymour within weeks of old Henry's death.  She was also, as Porter points out, popular with her stepchildren, which can't have been easy with such a bunch.  This latter, I suggest, is what Porter really brings fresh to the party.  Katherine the Queen may not be the first in its field, but it may well be the best to date.
Posted by rogerwood at 16:47