Something Nasty in the Woodshed/Beast of Jersey

The second of Kyril Bonfiglioli's comic capers featuring the Hon Charlie Mortdechai is set in Jersey, where Bonfiglioli himself popped up following publication of his first, Don't Point That Thing at Me, previously reviewed on this blog.

The most striking thing is that the story centres on the truelife Beast of Jersey, Edward Paisnel, who had only been sentenced for a decade of appalling sexual attacks on women and young boys seven years before Bonfiglioli's comic take was published.  What is alarming is how heavily Bonfiglioli relies on the cash-in book, The Beast of Jersey (1972), ostensibly by Paisnel's wife, Joan.  I say 'relies' but I am being over-generous: Bonfiglioli simply lifts great tranches of Beast, lock, stock and barrel.  It is such shameless plagiarism that I recognised some passages almost forty years after originally reading them.  So I re-read the original, a huge success in its day, and I was right.

Otherwise, Something Nasty is vintage Mortdechai, full of drink, debauchery and generally disgraceful behaviour, all rendered in wickedly cynical banter.  The story, effectively making fun of rape, is unpleasant, not to say ridiculous - but anyone reading Bonfiglioli for the story has made a fundamental mistake.

As for The Beast of Jersey itself, cobbled-together cash-in though it is, it is also a classic of its type and era, as ubiquitous in its day as Emlyn Williams' study of the Moors Murderers, Beyond Belief. Everybody I knew had a copy and I daresay most of us still do.  There must have been a massive first edition but so far as I can tell nothing further.  The cover remains iconic. 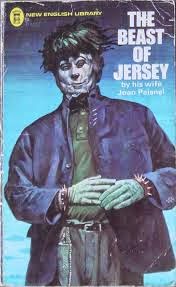 Yes, Paisnel walked about a five mile long island where he had lived all his life dressed like that and no one noticed.  Like the Yorkshire Ripper ten years later he was caught by traffic police for a relatively minor infringement.  The book itself is a second parallel with the Sutcliffe case.  Nobody believed Sonia Sutcliffe couldn't have suspected something about her husband and people felt the same, apparently, about Paisnel's wife Joan.  Indeed, Paisnel's behaviour was much more bizarre than Sutcliffe's and, of course, he was committing crimes on his doorstep whilst Sutcliffe capitalised on his job as a HGV driver.

For example, Paisnel and Joan did not live or sleep together as man and wife, to the extent that he built accommodation for himself onto the family home.  He told fantastical lies about his past which she soon knew were rubbish and he first approached her in connection with the children's home Joan ran with her parents. (Yes, I know - Jersey/children's home/paedophilia - but the official line is that Paisnel had no connection with Haut de la Garenne, it's a complete coincidence.)

Anyway, Joan very quickly got her account into print.  The book purports to be by her but the few times we do hear her voice stand out like sore thumbs - for one thing, they all share the same message: "I knew nothing!"  The real authors were Alan Shadrake (recently imprisoned in Singapore for attacking their judicial system) and John Lisners (recent biographer of Rupert Murdoch).  The speed of their writing is obvious from the vast number of typos and grammatical errors.

For all that, it's a strong read that stands the test of time.  What struck me most on re-reading it this week, was Paisnel's sentence - thirty years, a phenomenal sentence at that time.  He got full remission and died a free man in 1994.  Today he would have got multiple life sentences without possibility of parole.  And we think we've made progress...
Posted by rogerwood at 16:10