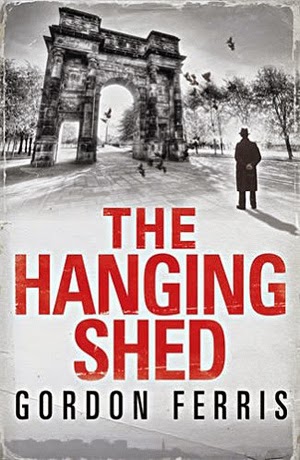 I said I didn't need to read it because I'd read the follow-up which gives the plot away.  But I read it anyway and whilst I did already know some of the plot, there was enough extra storyline to reel me in.

It's 1946, Brodie has spent the months since being demobbed in London, doing a spot of casual freelance journalism.  But he's called to Glasgow by old school pal Hugh Donovan who has got a bit of a problem.  He's been found guilty of murdering a little boy and is due to hang in a couple of weeks.

Donovan used to be the best looking lad in his age group.  Not now - trapped in a burning cockpit, he's a monster now, hooked on painkillers.  Brodie hasn't seen him since they were in late teens.  They stopped being best pals when Donovan took Brodie's girlfriend.  It's her son Donovan is said to have killed.

It's more Richard Hannay than Inspector Rebus but it moves along and has moments of reflection.  On balance I think the key element of the storyline, the whys and wherefores of the boy's death which I obviously won't reveal here, is too easy.  It's in all the papers and it's the first idea every new crime writers reaches for.  Which means you kind of expect it from every new crime writer.

I liked Bitter Water better, and I'll certainly read the other two Brodie novels, Pilgrim Soul and Gallowglass.  What I really like the sound of though is Ferris's other series, about a private eye with amnesia.  Why the hell he chose to call him McRae is beyond me.  Stuart MacBride has that one covered.