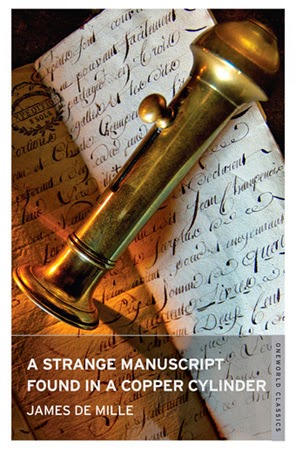 A real oddity, this.  Published posthumously in 1888, it follows the well-known fantasy trope made abundantly clear in the title, blending The Lost World with Gulliver's Travels.  The manuscript author gets lost in Antarctica and penetrates through to a semi-tropical land where dinosaurs co-exist with the Kosekin people who are incredibly kind and welcoming but who regard death as the best thing in life.

As an adventure yarn, there's not enough adventure.  There are nowhere near enough dinosaurs and those we do get - pterosaurs excepted - are simply not described well enough to be properly threatening.  So once we get established in the new world we have nothing to detain us but the unusual habits of the Kosekin and a rather tedious, formulaic romance.

The publishers (or re-publishers in this case) try to make the case for it being a satire of mid-Victorian mores, but it's not.  It's the oldest trope of all in satire, the world turned upside down.  Aristophanes did it better more than two thousand years earlier.  Again, once the premise is established - we love death/you love life, divorce is the best thing about marriage etc. - we have nowhere else to go.

For me, the part I really enjoyed was the framing device, usually the part we skip in these things (I particularly remember the tedium of the device in William Hope Hudgson's otherwise thrilling From the Tideless Sea).  Here we have an inbred toff on his yacht with a doctor, a writer of fiction and a linguist.  The chinless wonder is genuinely amusing, the writer dismisses the manuscript as a fake, and the two scholars get deep into debate of what and where the things described might be.  I can't help thinking these are the bits the academic De Mille enjoyed most too.  The very best, the last - we have to go back to the yacht, it's a requirement of the form, but instead of a wearisome epilogue, De Mille simply gives us:


Here Featherstone stopped, yawned and laid down the manuscript.