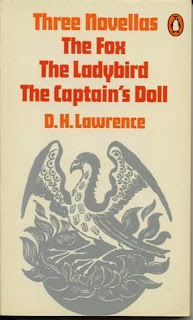 The Ladybird is set at the very end of World War I.  Lady Daphne's husband is a POW in Turkey, Count Dionys, a German officer she knew as a child, is in a military hospital in London and then a detention house for enemy officers.  Both men are eventually released.  Daphne has to examine her feelings for both of them.  On the surface, it's very Lawrence, full of mystical sexual impulses.  I enjoyed the contemporary subtext, though.  At one point it seemed to me Lawrence was reflecting on the fall of the old imperial order and advocating the rise of new, charismatic leaders.  1923, when the trio of novellas was published, is too early for Hitler or Franco but Mussolini had become Italian PM the year before.  Is this what Lawrence was responding to?

The Fox is more archetypical Lawrence - brutish young stud comes between two undeclared lesbians running an unproductive farm.  It is powerfully atmospheric, and I found the characters interesting, but the predatory fox metaphor is obvious and overdone.

The Captain's Doll purports to be a comedy.  I enjoyed until about halfway, when the machinations of plot took over from character.  Then it lost me completely with the longest, most tedious travelogue since that awful, endless passage in the middle of Little Dorrit.  In both cases it is purely filling space.  By far the least interesting of the three.
Posted by rogerwood at 12:14

Email ThisBlogThis!Share to TwitterShare to FacebookShare to Pinterest
Labels: D H Lawrence, novellas, the captains doll, the fox, the ladybird