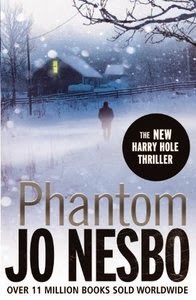 As it says on the cover, the new Harry Hole thriller, and the best yet in my view.  Harry gets into the story good and early and there's no need for him to opt out of the official police investigation as he is no longer a policeman and the real cops have already closed their investigation.

Harry's excesses are understandable because the case is the only case that conceivably drag him away from his sober new life in Hong Kong.

I particularly admired the way Nesbo is prepared to take risks.  Who is this talking at the beginning and indeed all the way through.  Then we realise.  Then we realise who he is talking to.  Superb craftsmanship.  I can't think of anyone else who could pull it off so successfully.  The only comparison I can think of is Nesbo's standalone, The Headhunters, which is probably the best Nordic Noir novel ever.

After the disappointment of The Bat, which was juvenilia best left untranslated, Phantom came as a huge relief.  Nesbo on top form - unbeatable.  And the next Harry Hole, Police, is already out.  Let me at it!
Posted by rogerwood at 15:48