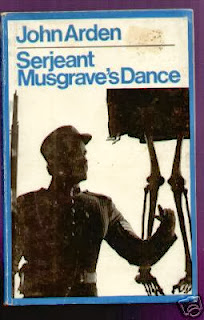 Classic stage play in the classic Eyre Methuen blue paperback, the badge of quality when I began collecting drama.  Serjeant Musgrave was first performed at the Royal Court in 1959, produced by Lindsay Anderson.  Every element of that sentence is a badge of quality.
﻿
It was resonant then and it's resonant now because it is more than anti-war play; it is, to my eye anyway, anti pointless colonial wars which also asks the question, what do you do with a standing army in peacetime - why loose it on the working class, of course.  How often have we seen that?
For those unfamiliar with Arden's blend of Brecht and folk tradition the writing might seem difficult.  If so, the trick is to read it aloud.  Then it sings.  Arden came towards the end of the Angry Young Men era but he continued writing longer than any of the others and, more importantly, kept his anger stoked to the very end.
Posted by rogerwood at 12:12