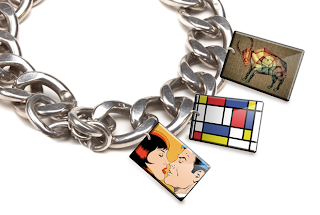 Swag Man is a short memoir/long article published as an Amazon Kindle Single by the Tablet Magazine (a new read on Jewish life).

The Swag Man in question, we assume, is Howard's father Max, a huckster on the Manchester markets, always on the verge of making millions or going bankrupt, but never quite managing either.  Howard, of course, was dragged into service for Max's routines, and had no aptitude for it whatsoever.  But the true hero, the Swag Man made spectacularly good, is Frank Cohen, apprentice to Max, hero to Howard, DIY entrepreneur, collector of YBAs and co-founder, in April 2013, of the free to enter Dairy Art Centre in Bloomsbury.

What Jacobson gives us, in under fifty pages, is a snapshot on Jewish advancement in Manchester in the second half of the twentieth century, the last time someone could rise from the street markets to a Cheshire mansion, or in the author's case, the Booker Prize and sub Stephen Fry national treasuredom.  Two decades of Blair and Cameron and that awful prune Clegg have put a thorough-going stop to social mobility.
Posted by rogerwood at 15:33