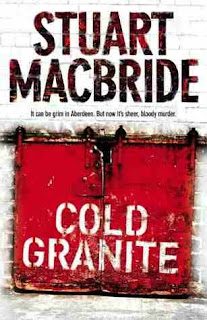 This is it, the first of the Logan McRae series.  Well, I say first.  Certainly it is the first to be published - it is, indeed, MacBride's first published book - but the sheer amount of backstory here makes it clear to me that there was an earlier, unpublished attempt.  No doubt whilst hawking that round publishers MacBride wrote a successor, Cold Granite, which was accepted, helped, probably, by the amount of backstory.

Anyhow, it's a thumpingly good start, an assured welcome to the world of Grampian Police.  Logan is back on duty a year after having his guts perforated by a serial killer he captured.  This is why they call him Laz, because he is Lazarus back from the dead.  The day starts badly.  The mutilated body of a small boy have been found.  Things spiral downhill from there.  DI Steel is otherwise engaged, so Laz is assigned to DI Insch, he of the temper and the sweeties.  The pathologist is Laz's ex, Isobel.  The newshound harrying McRae for the inside track is the new-in-town Colin Miller.

There are other magnificent writers of Scottish crime fiction - Rankin, McDermid, Mina (whose just won an award for her latest) - and all crime fiction is to a greater or lesser extent noir, but MacBride is far and away the most accomplished purveyor of Tartan Noir as a specific genre, and with Cold Granite established himself as such from Day One.
Posted by rogerwood at 11:51