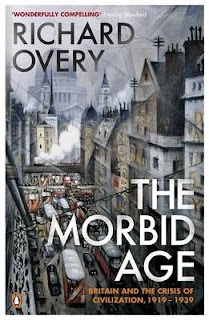 This is the antithesis of the inexplicably popular David Kynaston books, which strike me as little more than informed cut-and-paste from the popular press.  Overy, by contrast, concentrates entirely on intellectual discourse with virtually no press or even parliamentary context.  Were people like Cecil Day-Lewis and Storm Jameson really influential outside their metropolitan peer groups?  How has Overy measured their cultural penetration?  Does he really care about opinion in the great industrial cities?  Does he appreciate the influence of worker's education, the co-operative movement or night schools in the North and Midlands?  (A single paragraph four pages from the end is all we are offered on the Labour Movement per se.) Were things different in Wales and Scotland and Northern Ireland?  Overy doesn't even mention that in the Thirties the BBC had extensive regional opt-outs - slots which were precisely the dais for alternative local input on the major issues and preoccupations of the day.

For all its shortcomings, The Morbid Age is a magnificent read.  Overy is hugely well-informed about his chosen era and, more importantly, has taken the time to consider his source material critically and in depth.  The title is his thesis and he amply proves it.  Essential reading for anyone interested in the period, wholly reliable within its own terms, but not the whole picture.

Talking of pictures, how great is the Christopher Nevinson painting they've put on the cover?  As iconic, in its way, as the original artwork for Metropolis.
Posted by rogerwood at 11:49