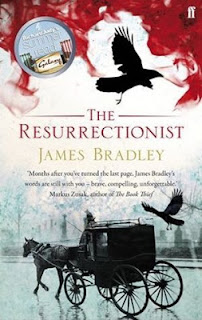 The Resurrectionist is exactly what it says it is, set in London at the turn of the 19th century, the story of young Gabriel Swift, apprenticed to a respectable anatomist, who finds himself subsumed into the dark underbelly of the business.  I was unfamiliar with the work of James Bradley, one of Australia's foremost young novelists.  He is a writer I shall be following with interest.  I love the way he writes, using present and past tenses to separate main narrative from backstory.  His turns of phrase are often unexpected, sometimes poetic.  I like the fact that he doesn't feel the need to wrap up every loose end (Gabriel doesn't know, so why should we?)  I especially admired the confidence with which he switched the scene about four-fifths of the way through.  A good read - and an important novel. Recommended.