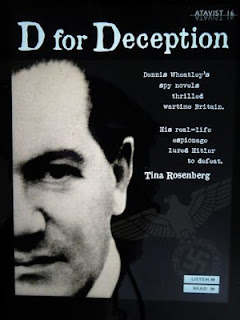 D for Deception is a Kindle Single, a short piece somewhere between a magazine article and a paper (in this case 44 pages).  Originally, in America, it was e-published by The Atavist, a digital publisher with several titles that appeal strongly to me.

Tina Rosenberg is a Pulitzer-prize winning journalist.  This is not her finest work.  Reviews imply deep research but the only authority here is Dennis Wheatley himself.  It may be he did what is claimed - his wife and stepson certainly worked for MI5 - but Wheatley was a writer of his time, when popular authors cultivated an air of exotic sophistication.  Wheatley certainly made himself out to be posher than he was and he may well have made his wartime service seem more significant than it really was.  Without direct references to official records, which are easily available (I bought some associated material the day before yesterday for a princely £3), we shall never truly know.

I think we can safely say he played a role and sacrificed some personal success to serve his country. After a five-year break from publishing novels to make time for his war-work, he never again achieved the sort of sales he enjoyed pre-war.

This, then, serves as a reminder that Dennis Wheatley was a cultural icon of his era, with a truly enormous readership.  Nowadays remembered - if at all - as a writer of occult adventure, Rosenberg reminded me that he also wrote early spy fiction with the Gregory Sallust series.  I have a wartime edition of one of them, Faked Passports, published in June 1940, just before he joined London Control.  I have dug it out and added it to my reading stack.
Posted by rogerwood at 17:14