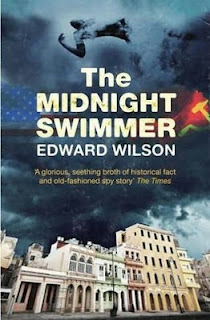 I'm not the biggest fan of spy fiction, particularly spy fiction of or set circa 1960.  OK, it's Bond, I absolutely hate Bond - I lost interest in the movies with Thunderball and the novels as soon as my voice broke.  I tried reading the novels again recently - Casino Royale and Diamonds Are Forever - and I still find them poorly written and pompous.

Imagine my reaction then, to this, the third in US expat Edward Wilson's series featuring William Catesby, a Bond clone with a difference in that he wears the bowler and pinstripe but began life as a working class lad from Lowestoft.  I absolutely loved it.  One major attraction is that it's wrapped around real events (the Cuban missile crisis) with real people mixed in with the fictional.  There is something of Deighton is the amount of detail Wilson delights in, and inevitably a flavour of le Carre in the double-dealing.  Like his protagonist, Wilson's attitudes and conclusions are often unexpected.

The writing is not without fault.  There are a lot of unwarranted question marks in the later sections of the ebook, a sign of faltering proofreading, and - more seriously - there are far, far too many epilogues.  It's a series; who cares what happened next?  We'll find out in the next instalment.

Wilson himself is an unusual character.  Baltimore-born, he fought in Vietnam but ended up teaching further education in England.  He has been a British citizen for 30 years now.  I'm keen to read the earlier Catesby novels but especially keen to read his Vietnam novel, A River in May (2007)
Posted by rogerwood at 16:36