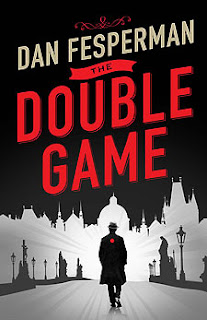 A real oddity this.  Bill Cage is in his fifties, an unhappy PR man, when he gets dragged into the world of espionage.  Fortunately he had always been a big fan of spy novels - his father, a former diplomat, has a fine collection - and he recognises the literary clues that are being left for him.  The question is, was former spook turned best selling author Ed Lemester a double agent?  And if so, who wants to know?  Bill finds himself led all over Europe, in and out of the former Soviet bloc, a reunited with his first proper girlfriend Litzi, now an archivist in Vienna.

The book is very, very clever.  Many of the literary references are genuine, though the ones from Lemester clearly aren't - and Fesperman reinforces the trick with a scholarly appendix listing the key spy fiction and identifying which authors were former spies.  The danger, of course, is that the game might become tiresome, but it never does.  True, there is no real jeopardy to keep the reader hooked, but Fesperman makes the mystery itself so compelling that it alone is sufficient interest.

Fesperman has written eight novels.  On the basis of this one, I shall certainly look out for more.  The Arms Maker of Berlin looks like my kind of story, and there are two novels featuring Vlado Petric, a homicide investigator in Sarajevo.
Posted by rogerwood at 17:46