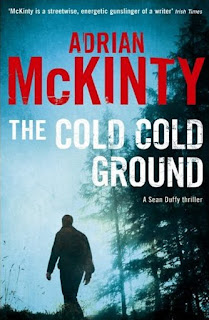 I don't know why it's called In the Cold Cold Ground, because nobody is except, at the very end, a character so peripheral to the plot that we don't even meet her.  That small quibble notwithstanding, this is a superb crime novel set in Northern Ireland in 1981 and thus blending murder, spies, and sectarian terrorism.

It is the first in a series featuring Sean Duffy, a Catholic CID man in the RUC.  It is hardboiled but, refreshingly, Duffy doesn't drink to abnormal levels and he doesn't beat up women on an impromptu basis.  He doesn't even try to get himself killed on a daily basis.  He gets taken off the case, sure, but gets back in not by being a maverick but by solving the secondary case which his superiors don't even consider a murder.  The authorial sleight of hand is masterly.

In the blurb on the back someone describes McKinty as "the finest of the new generation of Irish crime writers."  I wouldn't know, I'm afraid.  The only other Northern Irish crime writer I'm familiar with is Eoin McNamee, and I like him a lot.  (Interestingly, here is McNamee reviewing The Cold Cold Ground for the Guardian.)  Now I like McKinty too - for the Troubles stuff I like him even better than McNamee, because McNamee is best at the vintage, real-life stuff.  I am certainly on the lookout for more.

Adrian McKinty's blog, highlighting the second Duffy novel I Hear Sirens in the Street, is here.
Posted by rogerwood at 09:48