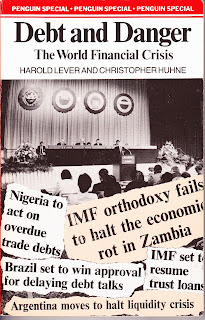 This a Penguin Special from 1985.  Lever, Labour MP and peer, had spent the previous year chairing the Commonwealth Prime Ministers' Commission into the Developing World Debt Crisis, which recommended 'forgiving' or writing off much of the debt to help raise these nations out of abject poverty, a policy finally enacted in 2005, and which didn't work because the so-called Developed World had meanwhile gone bananas, rebranding debt as profit and shovelling all the real money out of the economy as dividends and bonuses.  Lever's collaborator is that Chris Huhne, erstwhile LibDem MeP, MP, minister and, at the time of writing this, jailbird.  In 1985, however, he was a respectable financial journalist, before that became a contradiction in terms.

Lever and Huhne describe a nightmare scenario of failing banks, state bailouts and the overnight evaporation of national wealth and wellbeing.  We, of course, live that nightmare for all the reasons Lever and Huhne foresaw thirty years ago.  What would happen, they ask, if the ludicrously over-indebted suddenly decided to tell their creditors to forget it?  Can't pay, won't pay, what are you going to do about it?  Which is what Mexico did in 1982, apparently, though that is incredibly small beer compared to what happened in 2008.  Our authors saw the future:

"The influence of a serious default would extend to all other financial markets and into the real economy of output and jobs through other channels as well as the influence of a credit crunch. We have no faith in our, or anyone else's, ability to quantify the effects of a major default. It would be a leap into the unknowable in which uncertainty and doubt could have devastating effects.  ... The dislocation of the banking system would create a situation in which businesses would not know whose credit was good and whose bad.  If the banks themselves were insolvent, whose credit could be trusted?  Orders would go unfilled.  Businesses would cut output and meet demand from stocks.  Jobs could be lost by the hundreds of thousands."  [p. 122]

Note the use of that phrase, "the real economy" - tacit acknowledgement that financial markets are an unreal economy.  But in post-crash Britain 2013 they're the only economy we aspire to.  Madness.  Will we never learn?

We had to wait until the last chapter for mention of my financial anti-hero, Milton Friedman, whom I consider to be one of the most damaging crazies of the last century.  His solution to developing world debt was apparently "to force the banks to price the worth of their developing-country debt in the market-place, which would determine its value.  They would then be required to write down losses according to the value placed on the assets by the market.  The theory is that the debt of countries which are heavy borrowers would trade at a larger discount, ensuring high enough rates of interest to discourage them from borrowing any more."  Yeah... if only markets or indeed debtors behaved like that.  Friedman's so-called free market model (so named in the absence of any such thing so long as people live together in communities and have any level of humanity) only ever served to lend a veneer of philosophical justification to the activities of stateless, feral financial freebooters.

Reading this book you have to constantly remind yourself that this is thirty years and at least two financial crashes ago.  Surely one day we will have a common sense consensus.  Capitalism always has to be regulated with an iron fist, otherwise the banks will always eat one another.  A market without public sector, not-for-profit and co-operative players is not a market at all, it's a cartel.  To make millionaires, you have to have paupers.  For every billionaire, townships in the poorest nations starve to death.  How is that acceptable?

What is really scary here is that the so-called emerging economies which we now have to pretend are going to save the world are exactly the same economies which caused the world financial crisis Lever and Huhne are writing about.  Did they ever pay back any of their debt?  No.  Has their debt got any smaller?  Au contraire.  Will they save the world as we know it?  Will they f-----!
Posted by rogerwood at 16:17