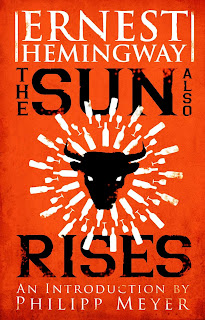 Hemingway's classic roman a clef - also known as Fiesta - was published in 1926 to instant acclaim.  A group of expats meet up in Paris and move on to Pamplona for the Fiesta of Saint Fermin and the bullfighting.  The relationships of the expats is mirrored by the rivalry between bullfighters and their deathly dance with the bull.

Jake Barnes is the Hemingway figure but he is no bull because he has been neutered by a war wound.  He loves the beautiful Lady Brett Ashley and she loves him as much as she loves anyone else.  But she also loves other members of the group, Robert Cohn, whom she has recently spent a holiday with, and Mike Campbell, the British bankrupt she is engaged to.  Unable to have a sexual relationship with Jake, she prostitutes herself with other men, including the young matador Romero, who is only half her age.  Meanwhile the drunken Campbell baits Cohn in the same way Romero taunts his bull in the ring, and Cohn - a college boxing champion - ultimately strikes back.

In one sense Brett is the ultimate New Woman of the Twenties - sexually promiscuous, hard-drinking, frankly doomed.  But Barnes is a Catholic and, as narrator, takes a high moral tone, contrasting Brett with the working girl (Georgette) he picks up in Paris.

The Sun Also Rises is short, complex, multi-layered, experimental and, in summary, a modern masterpiece.  Is it Hemingway's masterpiece?  I haven't read enough to take a view.  But I was enthralled from the first page and became completely immersed.