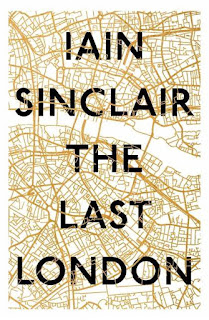 Sinclair's forty-year project to map the soul of London ends here.  The London he started exploring in the 1970s no longer exists; perhaps its soul no longer does, either.  Sinclair certainly struggles to find it.  When he started out London, only recently been rebuilt after the Blitz, was in apparent decline.  Rooms were cheap and plentiful, as were jobs of all kinds.  But a megapolis is always in a state of renewal and decline and Sinclair has documented the cycle.  He ends with the transients being driven from the centre to the furthest outskirts.  He starts here with London's putative great moment, the 2012 Olympics, which was alarmingly transitory, and ends with the vote to leave Europe in 2016.

Along the way he renews old friendships - fellow malcontents and dissenters, fellow psychogeographers.  They recreate former expeditions, revisiting old haunts where they still exist.  The Last London is a work of recollection, scrutiny and foresight, always moving, the synapses always firing, making and remaking connections with deeper history.  Time, for Sinclair and his associates, is not so much a progression as an accumulation.

I found it fascinating, endlessly thought-provoking.