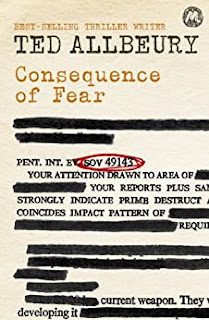 Ted Allbeury (1917-2005) was that rare thing among spy writers - a real one.  Yes, John le Carre and Ian Fleming were spies but not in the sense that Allbeury was.  Fleming, for example, was never in the field.  Allbeury on the other hand, was SOE, parachuted into France and remaining there until the end of the war.  Le Carre (David Cornwall) was in the field during the Cold War and therefore risked arrest.  Allbeury was actually captured by the Russians in the act of recruiting agents.

As to writing ability, Allbeury is certainly much better than Fleming.  He lacks Fleming's ability to fetishize the trappings of spycraft but perhaps makes up for it with better ideas for world threats.  In Consequence of Fear, for instance, written in 1979 and thus substantially before Chernobyl, the focus is a nuclear disaster which the Russians have covered up for two decades.

James Boyle was a spy in the war.  As such he ran Otto Lemke, a German spy captured in Croydon with a radio set, who for the rest of the war broadcast false material to his homeland in return for a train of young women willing to sleep with him.  Thirty years later Boyle is a QC who has just been offered a judgeship.  Lemke is an East German sports journalist who has somehow got hold of detailed documentation about the nuclear spill.  He is willing to trade this for asylum in the US with his latest teenaged girlfriend.  On one condition - he wants James Boyle to manage his defection.

So, under cover of offering legal advice to a TV company planning to broadcast the Moscow Olympics in 1980, Boyle heads for Russia.

I was impressed with how easily Allbeury guides his reader through the very convincing intricacies of Cold War political posturing.  The story does not develop as would generally be expected (and here Allbeury comes close to the standards of mid-career le Carre) and the end came as a complete surprise.  I shall certainly read more.