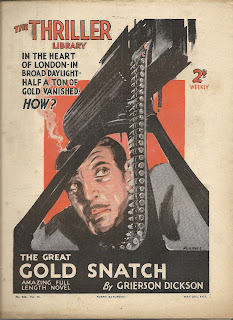 This is the way to read your period crime thrillers - in a weekly magazine from May 1937!

I was interested in 'Jimmy' Dickson because he was a friend of Max Knight, the original M, and like Max himself and most of his friends, he wrote crime fiction.  I wanted a sample but I didn't want to pay Amazon's COVID-inflated prices.  So I found this on Ebay and eminently satisfied.

The crime itself is explained in this magnificent header page: 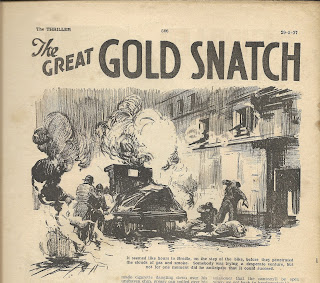 A truckload of gold bullion is hijacked along its route from Croydon Airfield to the Bank of England despite a fully armed police escort.  When Superintendent 'Cissie' Marlow arrives on the scene the gold has completely vanished.  How?  Well for once I spotted the clue, not that it matters.  The novella is genuinely thrilling, with high speed car chases and forensic science and close encounters of the gangster kind.  Dickson might have made a ghastly misjudgement in his hero's sobriquet, but boy, can he handle pace.

An added virtue is that it's set right on the cusp of traditional flatfoot policing and modern investigation.  There is a Flying Squad, with Q cars and a lab at Hendon, but look at the not very secure security van in the image.  It is just a van with reinforced wooden doors, because at that time no one had ever stolen such a volume of bullion, largely because of sheer weight.

I loved the cover image (signed A Jones, which is not much help) and the uncredited interior artwork.  I am on the lookout for more Dickson (but I'm still not paying Amazon's current prices).