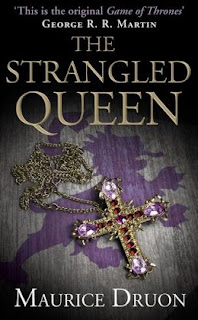 Book Two of what is said to have been a series which had enormous effect on George R R Martin. You can see why. Bloodshed, intrigue, adultery, and inbreeding between great royal and ducal houses, all of them closely related. Droun has either the advantage or disadvantage of it all being more or less historical fact.

Droun wrote The Accursed Kings (Les Rois maudits) between 1955 and 1977. The starting point is the destruction of the Knights Templar by Philip IV of France and his tame pope. The Order was accused of blasphemy but really the king and the pope just wanted their wealth. The Grand Master, Jacques de Molay, is burned at the stake. With his dying breath he curses the royal family - hence the title.

Inside a year Philip IV (the 'Iron King' of the first novel) is dead and his useless son Louis the Hutin (the 'hesitant') is on the throne. Louis and his younger brothers have all been married off to cousins who have all betrayed them with servants and attendants. Two of the sisters are still imprisoned at Richard the Lionheart's ironically-named Castle Galliard.  One of these, Marguerite, is now technically queen. But Louis is more than capable to embarrassing himself without her assistance. He wants the marriage annulled, and to achieve that he needs a pope. His great minister, Enguerrand de Marigny, naturally claims he can fix the problem. He had better, because King Louis's uncle, Charles of Valois, is after Marigny's head, and has the support of the giant Robert of Artois, friend and cousin of absolutely every member of the dynasty.

That is essentially the plotline of The Strangled Queen - in as near a nutshell as the tangled affairs of the House of Capet circa 1320 allow. The thing that makes Druon special among historical novelists is not merely than he can handle so much information, it is the lightness and ease of handling. Standard novelists would need 600 pages (we can only imagine how many massive volumes George R R Martin himself would require) bur Druon uses less than 300. To read him is a joy, and we should be grateful to Humphrey Hare for the expert translation. I have The Iron King here somewhere. I'm definitely going to re-read it.
Posted by rogerwood at 15:50