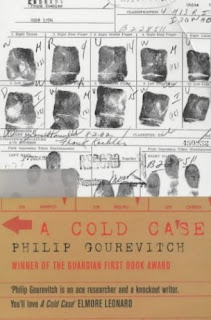 Philip Gourevitch writes for the New Yorker because he is a master of long-form journalism. And that's essentially what A Cold Case is - a long piece of journalism in big print with a few photos thrown in. It doesn't really amount to a book, largely because the subject isn't big enough.

In itself, the subject is fine. Frankie Koehler, a killer as a juvenile and violent armed robber in his twenties, killed two men in New York in February 1970 and vanished. Almost thirty years later a cold case investigator for the Manhattan DA picked up the case just prior to retirement. It turned out Koehler had ostensibly been living a more-or-less respectable life in California. There was, however, a suspicion that he might have been visiting New York every now and then to do favours for former gangland chums - in other words, killing people. So the police where waiting when Frankie was suckered into returning. They found him armed but cooperative.

It's a good story, as far as it goes. The problem is, Gourevitch doesn't really get enough insight into the life Frankie was living for the missing 30 years. Frankie fully admits the 1970 murders as part of his plea bargain, but nothing else. He seems to be revealing information to the cops and to Gourevitch himself, but it all amounts to nothing.

Interesting. That's about as far as I can go.
Posted by rogerwood at 14:57