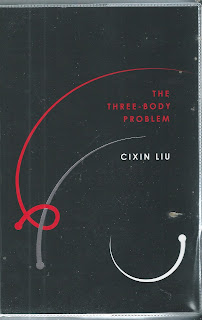 The Three-Body Problem is the first part of the trilogy Remembrance of Earth's Past.


It would be simplistic to compare Cixin Liu to Haruki Murakami, especially as both have written novels with similar-looking titles - China 2185 and 1Q84 respectively. But in truth there are very few similarities other than the fact that we in the West are extremely ignorant of contemporary trends in oriental literature.


Hurakami is a fantasy writer who dabbles in science fiction. Liu is hard-wired sci fi. There is a touch of fantasy in this novel but only as a literary device to introduce the male protagonist to the core idea of the book. Wang Miao is a researcher in nanomaterials, so you get an idea of just how extreme the central premise is. He is introduced to a VR game called Three Body. In the game historical scientists - some so ancient as to be mythical - try to solve the problem of an unstable world which crashes from civilisation to apocalypse and back again. Only the most knowledgeable and persistent players work out the answer and when they do they are invited to share a secret - that the world of the game is real and that the inhabitants of that world have been in touch.


The female protagonist Ye Wenjie watched her astrophysicist father get stoned to death during the Cultural Revolution in 1967. An astrophysicist herself, she is taken to a rural outpost for 're-education'. She starts at the bottom of the hierarchy, working with the basic mechanics of the radio scanner. But she progresses. The work becomes her obsession and she abandons hope of ever re-joining civil society. Eventually she is sufficiently trusted to be allowed into the secret of the real purpose of the scanner - the search for extra-terrestrial life - and she is on duty when the first message comes through.


After twenty years or more, China has changed. It has opened up, to a certain extent, to the West. Ye Wenjie is restored to academia. She develops followers, with whom she creates the Three Body game. She ends up, in the 'present' of the novel, which is a few years in the future, as the secret high priestess of the cult awaiting the arrival of the extra-terrestrials. Other secretive factions, including international security services, are not so keen.


Whilst it is not an easy read, especially for the science-phobic like me, The Three-Body Problem is nevertheless an extraordinary achievement. Cixin Lui is a scientist and obviously knows his stuff. He is equally in command of literary devices: the meta-drama of the game, the seamless sliding through time, even a spot of noir crime. I genuinely have never read a book like this. I simply have to read the next in the trilogy, The Dark Forest.
Posted by rogerwood at 15:54