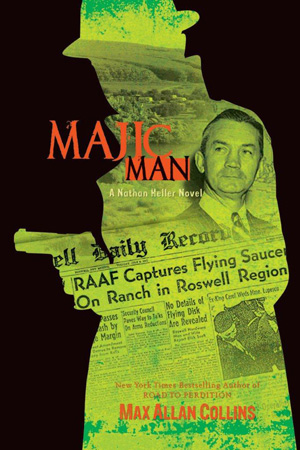 Majic Man (1999) is the tenth of Collins's Nate Heller series. If you think that's a lot, you seriously underestimate Max Allan Collins. A glance at the list on his website will soon put you right. For someone who has written so much, I am amazed at the standard Collins consistently achieves. Majic Man is no exception.


The thing with Heller is that he has been involved in every American major crime/unsolved mystery in the second half of the 20th century. Now, in retirement, he is committing his secrets to paper.


The stories are therefore based on fact. The fact comes from a reasonable amount of research - and Collins names his sources in quite a useful literature review at the back.


The year is 1949 and PI Nate is hired by James Forrestal, President Truman's Defense Secretary because he believes someone is out to get him. Certainly the powers-that-be are on his case. Very soon he is forced out of office on health grounds and confined to the psychiatric unit at Bethesda Naval Hospital in Maryland. Is this because he was a keen financier of Hitler before the war - or because of something he knows from his time in government?  And by the way, this much is all historical - that's Forrestal's photo on the cover.


The cover also gives away the second string of the novel. Is the Roswell Incident, the 'UFO' crash and possible military capture of a surviving alien, what Forrestal knew about? Nate heads for New Mexico to investigate. Nate  and presumably his author - reach fascinating conclusions. The entire novel is fascinating thanks to the way Collins combines history and (disputed) fact with all the tropes of postwar noir crime fiction.


I really enjoyed Quarry's Choice last year and I loved Majic Man. Fortunately there are heaps of Collins's mammoth oeuvre still to tackle.