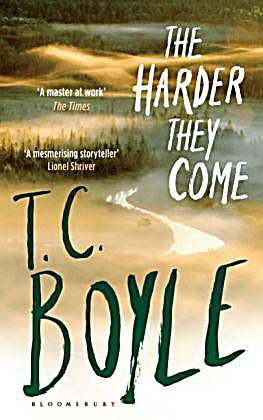 Boyle's more recent work seems to have settled into a sort of skewed state of the nation groove. When the Killing's Done was broadly about environmentalism, The Harder They Come is generally about survivalism. I use the word skewed because we are talking Boyle here, author of The Road to Wellville (enough fibre in your diet will quell your baser instincts) and, my personal favourite, Riven Rock. Boyle might start out in contemporary America but you are always going to end up somewhere in the past. Here, it is the closing years of the 18th Century and our avatar is the legendary mountain man John Colter.


Adam Stenson likes to be called Colter, in homage to his hero. When he is off his meds Adam starts thinking he is Colter, which makes everyone else he comes across 'hostiles'. Adam's dad, Sten, is a recently retired high school head who has become a local hero after tackling and killing an armed Costa Rican robber on his post-retirement cruise. Not that Sten is by nature a have-a-go-hero but the old Vietnam training never really goes away.


Adam has been living quite happily in the woods at his maternal grandmother's house, merrily developing a poppy plantation and milking the seed-heads. But the old lady is dead now and Adam's parents want to sell the house to cover the costs of their move to the Californian seaside. Adam resents this deeply, albeit he's built himself a couple of bunkers in the woods. Then he meets Sara, a militant freethinker twice his age - and things start to go generally haywire.


Boyle is a genius writer with a gift for taking you inside the heads of his various characters. Storylines overlap and intersect so smoothly you can't quite see the joins. His characters are always fundamentally decent people who have inadvertently found themselves adrift from mainstream life. I have devoured his novels ever since I first picked up Drop City ten or so years ago. I love his attitude almost as much as I love his writing. I recommend him without reservation.
Posted by rogerwood at 16:45