Ballard's fiction sprouted from ideas, not character. His characters tend to by cyphers, even when - as here - they are actually called James or Jim Ballard. The idea here, in 1973, is that cars have become fetishes, the greatest fetishes ever because we build endless motorways and parking facilities to accommodate them. 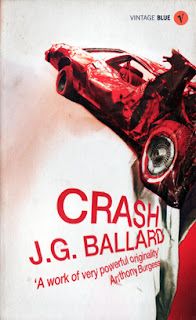 James has an accident and while in hospital he becomes peripherally aware of Vaughan, a former TV star who lost his career when he lost his looks in a crash of his own. Vaughan has become something of an iconoclast. The only way he can get sexual arousal from the car-fetish is by crashing. He has devised elaborate sexual fantasies about the death-by-car of the film star Liz Taylor, who is in Shepperton, the ultimate Ballard location, filming some rubbish of the kind that propped up the British film industry in the 1970s.


James has a modern marriage. He and his wife are both besotted with Vaughan and his scars. James goes further and has complicated sex with Gabrielle, who has been crippled in her accident, in her specially adapted invalid car.


The book is profoundly offensive and is meant to be. After a while you come - as intended - to view the car-sex in the same way you might skim through a list of the latest features on the car you were always going to buy anyway. For most of the book Ballard uses exactly the same language - blunt, functional, technical - for sexual orifices that he uses for buttons and switches on the cars. Things liven up when Vaughan and Ballard have wild sex on acid outside a breaker's yard.


Crash is a technical exercise rather than a novel. It achieves its purpose and I'm glad I read it. I won't be reading it again.
Posted by rogerwood at 16:18