Alan Judd is an author who took his time to find his genre. He has been writing a long time - he won the Winifred Holtby Prize as long ago as 1981 - but has not been prolific until now, in his retirement from other professions. 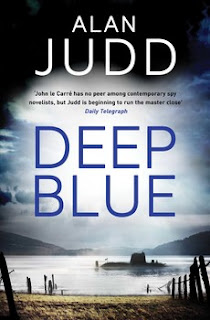 His main character, Charles Thoroghgood, is now C, the Chief of MI6 but first appeared many years ago in a novel about the Irish Troubles, as a soldier, which Judd was in the late Sixties and Seventies. Here, Thoroughgood becomes embroiled in one of his earlier cases, a anarchist plot to steal a lump of radioactive cobalt to make an anti-nuclear point. Such things were big in the Eighties, when Charles failed to catch those he knew to be responsible. Now extreme leftwing views are again current, with the SNP threatening the break the Union and swivel-eyed Tories imposing intolerable austerity on the working classes. We have no enemies to blast with nuclear missiles but still we persist in paying untold billions for a deterrent that probably won't work anyway.

I must stress that much of the last paragraph reflects my views, not Judd's or Charles Thoroughgood's. Yes, I am that leftie whereas Judd, career soldier and diplomat, is plainly of the right. That doesn't and never should prevent him being a supremely skilled writer with a particular gift for plotting. Despite the cover blurb from his employers at the Telegraph, Judd is not anywhere near John le Carre as a writer of spy fiction, nor indeed Charles Cumming. Where Judd excels is in the depicting the world in which senior spies have to operate, hedged in by transitory ministers and their SPADs. The SPADs trope is brilliantly worked here in Deep Blue.

Having stumbled on Judd by accident I am keen to explore more of his work. Many of his titles appeal to me. There's one about Shakespeare's sword, a couple about Nazi Germany, and a new Thoroughgood called The Accidental Spy. Now he has turned seventy Judd is clearly knocking them out at an increased rate - Deep Blue was published in 2017 and we're only three weeks into 2018. His non-fiction seems especially important. He is the biographer of Ford Madox Ford, a writer with whom he would seem to have much in common, and the definitive biography of MI6's first C, Mansfield Cumming.
Posted by rogerwood at 12:37