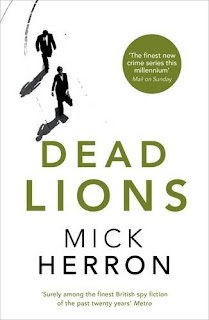 Dead Lions is the second of Mick Herron's splendidly warped Jackson Lamb thrillers. I have previously read and reviewed the fourth, Spook Street. It really doesn't matter what order you read them in. The plots are standalone and the premise is always the same: Slough House is where MI5 buries the second rate spooks who are too young to pension off; Jackson Lamb, in charge of Slough House, is a loose cannon whose appalling behaviour is redeemed by his single principle in life, unswerving loyalty.

Dickie Bow, had he been younger, would have been marooned at Slough House. He was certainly a slow horse. But he was in Berlin with Jackson Lamb, and when Dickie meets his maker on a replacement bus from Reading station, Lamb feels honour-bound to stick his nose in. This leads to the death of one of Lamb's own, seconded to nursemaid a visiting Russian oligarch. River Cartwright, meanwhile, grandson of a legendary spook, uncovers what looks like a plot to crash a light aircraft into the City's latest skyscraper by a nest of long-entrenched Cold War agents.

Herron's plotting is second to none. As in Spook Street he manages to walk the delicate tightrope between comedy and suspense. The action sequences are truly thrilling, the black humour of the dialogue always amusing, often laugh-out-loud. Surely somebody has to adapt the series for TV?
Posted by rogerwood at 15:10