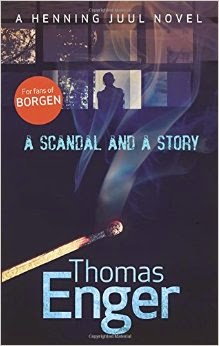 Scarred is the third Henning Juul story and Enger has unfortunately slipped into the trap facing all series writers.  It's not a Henning Juul mystery at all: Henning does virtually none of the crime solving and can't get directly involved in the scandal element because the subject of the scandal is his own sister.  More daring writers would have their hero break the rules, but Enger doesn't.  When it comes to the culmination of the main crime story Juul is ordered from the scene by his friend Inspector Bjarne Brogeland and meekly goes.  Worse, even we are denied the moment when the door is broken down and the armed response unit flood in.

Theoretically, I suppose we are supposed to be kept interested in Juul by his spasmodic quest to find out who torched his flat back in the first novel.  Perhaps readers who have followed the series from the beginning are interested.  Personally, there isn't enough here to get me interested.  Juul isn't developed enough to evoke empathy.

Check out the red 'sticker' on the cover.  It's a telling and fatal admission.  Not for fans of The Killing  or aficionados of Jo Nesbo, but for followers of Borgen, a series about a female politician who keeps risking her career over her frailties as a woman.  It's a fair enough parallel.  The murders start well but get dull very quickly, and it's actually a novel about Trine Juul-Osmundsen, not her brother.

On a positive note, I really enjoyed the use of the present tense and short chapters.  If you are determined to divide your narrative between three protagonists, short, punchy chapters is the way to go.
Posted by rogerwood at 13:11