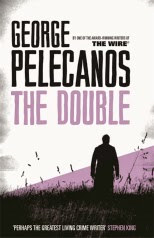 Some people say George Pelecanos is best known as one of the writers on The Wire and, latterly, Treme.  I had definitely read at least one of his noir crime novels before then, but I'm damned if I can remember which one.  I think it might have been Soul Circus.  Anyhow, this is his latest, barely a year old, and it's a classic.

The Double is the second novel featuring Spero Lucas, ex-marine turned private investigator.  There are a number of storylines but the main one concerns a woman who had her painting (The Double) stolen by an ageing stud.  The title of the painting is a metaphor for the story.  It's not a double but the two sides of one man's personality, and hunting for it reveals the conflicting sides of Spero's personality, to him as well as to us.

Once you read Pelecanos's prose, you will recognise his dialogue in the TV series.  He has crafted a unique voice for himself, not so extreme as Ellroy, nor so flamboyant as Elmore Leonard, but crisp and hard and utterly compelling.  I get the impression Pelecanos is not as well known in the UK as he should be.  Now that Elmore has passed and Ellroy seems to have got stuck, there really is no better crime writer operating in the US today.
Posted by rogerwood at 12:14